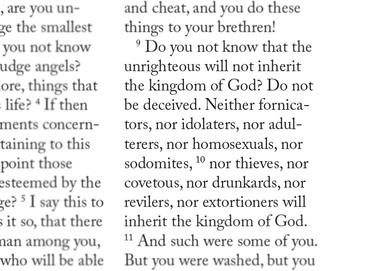 "The controversy over Phil Robertson’s comments about homosexuality remind us of the consequences of a public figure speaking their true thoughts about modern morality. It also shows us the selective nature of censorship. Here’s how.

Robertson is the CEO of Duck Commander company and one of the family stars of the popular television series Duck Dynasty. He is a Christian and like many of his Southern neighbors is not ashamed or afraid to state his beliefs in clear language. While giving an interview to GQ magazine he quoted from 1 Corinthians 6:9-10
where the apostle Paul clearly showed the consequences of not only homosexual behavior but other sins. 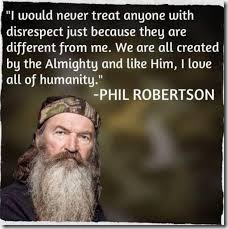 Paul runs the table on sinful actions in this passage. There’s enough there to offend just about everyone. All immorality including adultery and fornication (sex before marriage) is sin. Greed, theft, alcoholism and even loose lips can get us in trouble with God. But the media uproar and Robertson’s suspension from his television show is because he made remarks about gay morality and in today’s sexual oriented culture that’s taboo. Robertson could have rightfully shown how this scripture applies to tax fraud and no one would have blinked an eye. But today, if you take on the gay agenda in a prominent public manner you are open to immediate retribution.

This is shameless hypocrisy!"  More at: http://www.ucg.org/blog/hypocrisy-over-duck-dynasty/   by Darris McNeely

"Even Christians are debating the acceptability of the gay lifestyle. What does the Bible say?"

Deconstructing Pluralism: A Lesson from the 'Duck Dynasty' Situation

"Pluralism. It’s a product of a multicultural, diversified society. In theory it means that multiple cultures, beliefs, and special interests can live side-by-side and flourish in one common civilization. (Merriam-Webster.com).

It really sounds like a good idea. If you leave me alone, I will leave you alone and we can live in peace. Sadly, in action, it doesn’t work out that way.

Throughout the Bible, God inspired the definition of how life should be lived successfully, resulting in resurrection and eternal life in the family of God. That definition does not fit in with the way of life that swirls around our media and “pluralistic” societies, militant secularism. 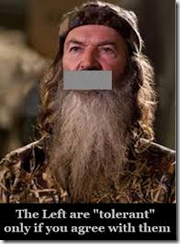 As evidenced by the media kerfuffle around the “Duck Dynasty”/Phil Robertson situation, a pluralistic acceptance of multiple viewpoints defining morality will soon be silenced. One way will be accepted and other voices will be cut off. In our case, the truth of God will become more difficult to speak freely.

“But Peter and the other apostles answered and said: “We ought to obey God rather than men,” (Acts 5:29, NKJV).

The challenge to us is this: Do we change our beliefs to fit the legal and peer pressure of man-made society, or do we stay true to the Truth ?"  Complete article at: http://www.ucg.org/blog/deconstructing-pluralism-lesson-duck-dynasty-situation/

Phil Robertson Will Return To 'Duck Dynasty' Episodes In January

"It looks like Phil Robertson's suspension from "Duck Dynasty" may be just for show. Entertainment Weekly learned that on Jan. 15, A&E will begin airing new episodes of the show that include scenes featuring the "Dynasty" patriarch.

The Robertson family hasn’t sounded as optimistic, with a source close to the Louisiana duck call clan telling E!:“They’re an extremely tight-knit family and they’re not going to let this get in the way. [Phil] is the reason for their success—they’re not going to abandon him. They’re also not about to let anyone threaten their religious beliefs.”

Meanwhile, the Robertson family has plenty of financial stability (for, arguably, future generations), thanks to their estimated whopping $400 million fortune." More at: http://www.huffingtonpost.com/2013/12/21/phil-robertson-duck-dynasty-return_n_4485646.html

Jeremiah 10: A Christmas Tree or Not?

"Is Jeremiah 10 really talking about a Christmas tree, or something else?"

Merry Christmas or Happy Holidays? What would Jesus say? 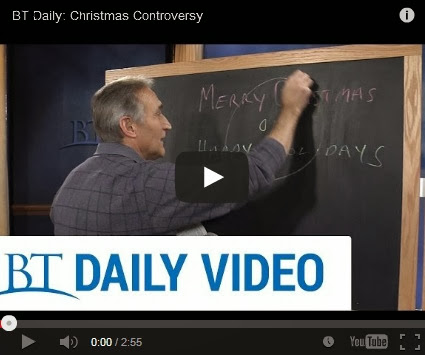 War on Christmas? Not Really

"It seems many people today are up in arms over what they call “The War on Christmas.”

They charge that many in the media and government are stifling the public image of Christmas by not using the word at all—or, as some would see it, watering down the reference by merely using generic terms, such as “Happy Holidays!” rather than “Merry Christmas!”

But is there really a war on Christmas?

I even remember neighbors down the street that had “Happy Birthday, Jesus” painted on their front window each year!

So what could be wrong with that? On the surface and at the time, it all seemed to make sense.

However, when one begins to delve into the origins of Christmas, the observing of Dec. 25, the image of mother and child, and even the tradition of Christmas being a biblically based Christian holiday—you realize that there is no such teaching or tradition taught in the Bible at all!

Yet today, it seems that many Christians are far more concerned about what secular and other media sources are doing to remove virtually all references to Christmas as a Christian holiday.

It’s what many call “The War on Christmas.”

But is that the real war? Well, it’s not. Bill O’Reilly is totally wrong on this one!

In fact, the real war is all but lost! And it is not the war on Christmas, but the war on truth!

The truth is, Christmas is not a Christian holiday at all and is nowhere promoted or taught in the Bible!"    More and video at: http://lifehopeandtruth.com/speaking-of/war-on-christmas-not-really/

History Channel Video:  "Did you know Christmas wasn't always celebrated on December 25th? Get the whole story behind the holiday."

The message on WGN TV this morning:

"If you feel you love Jesus, please ask yourself, "Does Christmas really honor Him?" Prepare to discover the astounding answer."

"A central player in the violent Lincoln County War of 1878-81, the cattleman John Chisum dies at Eureka Springs, Arkansas.

Born in Tennessee in 1824, Chisum moved with his family to Paris, Texas, when he was eleven years old. For several years he worked as construction contractor, but in 1854, he decided to go into the cattle ranching business. By 1875, Chisum was running over 80,000 head of cattle near the Pecos River in Lincoln County, New Mexico. Inevitably, such a large herd ranging over a vast and isolated area attracted the interests of rustlers, and Chisum claimed to have lost nearly 10,000 head to thieves.

Fed-up, Chisum joined forces with two other New Mexico cattle kings to do battle with the small cattlemen and merchants they believed were behind the thefts. In particular, the big ranchers targeted two Irishmen who owned a large general store, called the House, in the town of Lincoln. Besides giving aid to the rustlers and small ranchers that Chisum despised, the House also managed to gain control over most of the government contracts for supplying beef to Army posts and Indian Reservations, undercutting the ability of the big ranchers to sell their cattle directly to these buyers at high profits.

When a deputy sheriff under the control of the House murdered one of Chisum's allies in 1878, the Lincoln County War erupted. The battle was about more than that murder, though—it was a struggle for economic and political control of the region. Chisum and the big ranchers turned their cowboys into gunslingers—including a friendly young man named William Bonney, better know as Billy the Kid.

Billy the Kid became one of the ranchers' most loyal and fierce allies, playing a role in the murder of many of the supporters of the House. When the House eventually emerged from the war victorious, Bonney turned to Chisum for help, demanding $500 in wages for his murderous work. When Chisum refused, Billy turned against the rancher and took payment by stealing Chisum's cattle and horses. Suddenly abandoned by Chisum and the other powerful interests that protected him from the reach of the law, Billy the Kid's days were numbered. His one-time friend, Pat Garrett, murdered him in 1881.

Devastated by the Lincoln County War and the continuing losses of his cattle to rustlers and Indians, Chisum lost much of his wealth and power. Nonetheless, when he died at Eureka Springs, Arkansas, three years after the Lincoln County War ended in 1881, he left an estate that was still worth half a million dollars, a striking indication of the massive wealth he had accumulated."

After Wendy and I had our usual Saturday phone call, I got ready for church.  Jay called and he couldn't go with me, as there was a water leak behind his mother's fridge, so he had to shut off all the water.  I asked him to put a shut-off on the offending plumbing, so that he could go with me, and I would help him repair it today. But he said that the fridge had been moved right in the way of everything, and he had to stay there to fix it.

The song service was great, and the message was about Jesus' Birth.  John the Baptist preparing the way, Simeon's prophesy, and how He would be a light for revelation to the gentiles.  Then about His death in Mark 14.

The potluck was very tasty, and we all enjoyed the fellowship yesterday.

Posted by LakeConroePenny,TX at 9:13 AM