"The Ferruginous Hawk—North America’s largest hawk—is often mistaken for an eagle due to its size. The word “ferruginous” derives from the Latin word for iron, referring to the rusty brown of the species’ light color morph. (There is also a less-common dark morph).

ABC’s Dan Casey, our Northern Rockies Conservation Officer, is an admirer. “I have been observing the same pair—one light morph and one dark—nesting on a small prairie hillside north of Cutbank, Montana, for five years or more.”

Along with the Rough-legged Hawk, the Ferruginous is the only American hawk to have legs feathered all the way to the toes, an adaptation that may help preserve heat on the windy, often frigid plains where it makes its home. The feathering may also protect it from the bites of rodent prey.

Read the full account, including more from Dan Casey on a growing threat in the Ferruginous Hawk’s grassland home >>

Adorable videos of Northern Saw-whet Owls!
One of the three saw-whets found in November 2012. 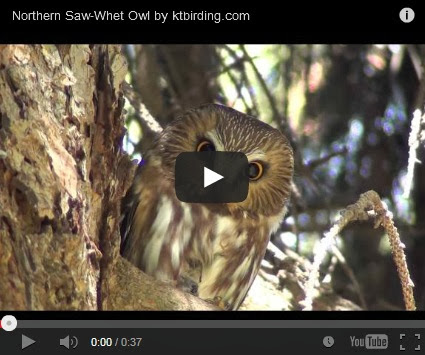 BirdNote: Sounds of Extinct Birds and the Christmas Bird Count

"On this day, Adolf Hitler declares war on the United States, bringing America, which had been neutral, into the European conflict.

The bombing of Pearl Harbor surprised even Germany. Although Hitler had made an oral agreement with his Axis partner Japan that Germany would join a war against the United States, he was uncertain as to how the war would be engaged. Japan's attack on Pearl Harbor answered that question. On December 8, Japanese Ambassador Oshima went to German Foreign Minister von Ribbentrop to nail the Germans down on a formal declaration of war against America. Von Ribbentrop stalled for time; he knew that Germany was under no obligation to do this under the terms of the Tripartite Pact, which promised help if Japan was attacked, but not if Japan was the aggressor. Von Ribbentrop feared that the addition of another antagonist, the United States, would overwhelm the German war effort.

But Hitler thought otherwise. He was convinced that the United States would soon beat him to the punch and declare war on Germany. The U.S. Navy was already attacking German U-boats, and Hitler despised Roosevelt for his repeated verbal attacks against his Nazi ideology. He also believed that Japan was much stronger than it was, that once it had defeated the United States, it would turn and help Germany defeat Russia. So at 3:30 p.m. (Berlin time) on December 11, the German charge d'affaires in Washington handed American Secretary of State Cordell Hull a copy of the declaration of war.

That very same day, Hitler addressed the Reichstag to defend the declaration. The failure of the New Deal, argued Hitler, was the real cause of the war, as President Roosevelt, supported by plutocrats and Jews, attempted to cover up for the collapse of his economic agenda. "First he incites war, then falsifies the causes, then odiously wraps himself in a cloak of Christian hypocrisy and slowly but surely leads mankind to war," declared Hitler, and the Reichstag leaped to their feet in thunderous applause."

"In the aftermath of World War II, the General Assembly of the United Nations votes to establish the United Nations International Children's Emergency Fund (UNICEF), an organization to help provide relief and support to children living in countries devastated by the war.

After the food and medical crisis of the late 1940s passed, UNICEF continued its role as a relief organization for the children of troubled nations and during the 1970s grew into a vocal advocate of children's rights. During the 1980s, UNICEF assisted the U.N. Commission on Human Rights in the drafting of the Convention on the Rights of the Child. After its introduction to the U.N. General Assembly in 1989, the Convention on the Rights of the Child became the most widely ratified human rights treaty in history, and UNICEF played a key role in ensuring its enforcement.

Of the 184 member states of the United Nations, only two countries have failed to ratify the treaty--Somalia and the United State. Somalia does not currently have an internationally recognized government, so ratification is impossible, and the United States, which was one of the original signatories of the convention, has failed to ratify the treaty because of concerns about its potential impact on national sovereignty and the parent-child relationship."

Misty and I went to pick up Jay, and we had our walk down there. 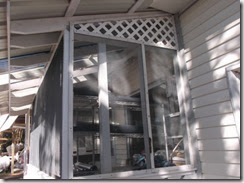 Jay and I put up the lattice on the first triangle, and also the screen molding on that side of the porch. We were well wrapped up, but our hands were soooo cold!  Then we screwed a clear vinyl shower curtain over that end, so that the rain can't blow in.

I took Jay home, but upon my return here I had hardly got in the door, when he called and said 'Hurry back down here, we have to take Mom to the Emergency Room'.

I rushed back down there, and Claudia was laying on her couch, pale and hardly able to move.   She had been feeling bad for the last three weeks, and had hardly got out of bed in all that time. As a liver transplant recipient, she could have anything go wrong, so it was time she was seen by a doctor.

We packed up some things for her, and I drove them to the hospital in The Woodlands, TX.  All her doctors are down there, so she didn't want to go to the nearest hospital in Conroe.

After she was all set up in an exam room in Emergency, their doctors had seen her, etc, we started back home, as there was nothing else we could do there.

We were looking forward to eating a quick Mexican buffet at Pancho's in The Woodlands, but they were no longer there.  So we stopped at Golden Corral in Conroe, and stuffed ourselves there.  No shopping on the way home, as we both had to get back to let our doggies out.

I had only just got organized at home, when Jay called saying that Claudia wanted to get out of the hospital.  As it was going to get dark, I couldn't go get her, so I handed that job over to their neighbor.  He has known them since they all lived in Houston, many years ago.  He and Jay went down there and brought her back home.

Claudia wasn't too happy with the hospital, all they did was give her a drip to rehydrate.  No real diagnosis, and none of her doctors came to see her.  They didn't do anything about her elevated creatinine levels and told her to see her doctor another day.

Posted by LakeConroePenny,TX at 7:25 AM

The medical profession doesn't seem to care about people like they used to. Now it is just big business.

How true! They just know how to prescribe for the symptoms, instead of getting to the root and prevention of illnesses.

I saw so much waste when I was in the hospital, and when I took Claudia to hers, too.

For instance, an orderly took 5 disinfecting wipes off a roll, TWICE, just to wipe down a clean little bedside table. No wonder medical costs are so high.