Cats, Dogs & Fish. I Heard the Waves in Hawaii.

Bobcat acts very differently when Mindi's dogs are here. She goes straight out on the porch first thing when I open the drapes and patio door, and doesn't strut around me, stiff legged, demanding her breakfast like she usually does. After all these years, she knows that I will be taking them outside first, so she might as well stay out from under my feet. She just waits patiently, as she knows I will get to her sooner or later. After I have brought the dogs back into the Grooming Room, I can drink my coffee, and see 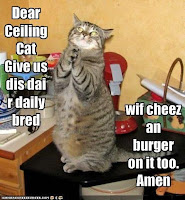 if there are any emails that need immediate attention. Like someone inquiring about something I have for sale.

As soon as I am dressed, I get all the little pet bowls lined in a row, and start fixing their breakfasts. I take the dogs out again after they have eaten, as that is when they most likely 'have to go'. There are 5 poodles, a little dachshund, Precious, and the newest member of the family, a Yorkie puppy called "Puddin' Pie". Someone else is taking care of the two Dachsipoos, (yes, Ceasar got to Precious), the outside dogs, and horses, while Mindi and her husband go to Hawaii.
I can tell that Puddin' was taken away from her siblings too early.

When young puppies start to play and one nips too hard, the other puppy will let out a shrill squeal, so that the Nipper learns not to hurt the Nippee. Puddin' never learned that, and all she wants to do is bite on my hands. I am having to teach her the No.1 rule in dogdom, " No toofies on skin". As soon as she starts I ignore her until she stops, then praise her, and give her a treat.
Finally this morning, Ray and I managed to get some work done on the Coronado. We put Elastomeric sealer on the top part of the roof, that will seal it, and insulate it. Then silver hammered paint on the top sides. Well, we only got one side done. I will take pictures when it is done.
It was a lot warmer today, so I brought Bobcat in off the porch early. I had to go back to the vet's office to get a different brand of prescription food for MaeMae. She is not a fussy dog, but she didn't like the first one. She ate the new kind tonight, but I hope that tomorrow she doesn't give me 'the look' which says "I'll eat it, if that is all you have, but I am not eating that again".
MaeMae and I went down to Jay's to feed his fish, but he had got back from Houston, and was messing with the tank again. I had told him the other day that his fish had Ich (Ichthyophthirius multifilis), as I could see a couple of tiny white spots on them. He wouldn't put on his glasses to look at them, and told me "No, they don't have Ich", so I had to let him get on with his beliefs. He keeps on changing the water, that stresses them, and that is one way they get Ich. I can't make him understand that he needs a filter on the tank either. I feel sorry for his fish, as they do have Ich! He knows it now, but would rather spend his money on beer than fish medicine.
When Mindi called to check on her "babies" from the beach in Hawaii, she held her phone to the sound of the waves. I had never heard Hawaiian waves before today.