Worked on Mirage and Coronado Again

It was a great day today, not too hot. No AC needed until some humidity rolled in. After a few drops of rain, the humidity went away, and it was nice again.

Ray worked on the Mirage doors cabinet again, he had to un-install them to wood putty, sand and re-paint a few boo-boos, where Jay had tried to install the hinges in the wrong place. Then he went to work on installing an outlet on that side of the Mirage, as there wasn't one. 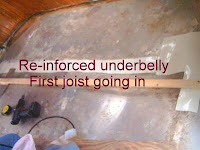 Jay and I worked on the Coronado floor. The underbelly is in great shape for a 62 year old trailer, we can tell that it was better built than the 53 Silver Streak Clipper and the vintage Airstreams that we have worked on. But there were still a few places that we felt should have metal riveted over thin spots, before attaching the joists. We also riveted metal over any of the plumbing holes that another owner had drilled in the underbelly. They had run plumbing lines all over the place for the bathtub they installed under the corner bed, and then the weird place that they had installed the water heater. One line went across a doorway!! The plumbing should all be inside, except for one outlet underneath. Once the floor gets in, it would be too late to cover

those holes. We did what we could, and then went into town to two hardware stores to get more rivits, and some special screws.
This is a picture of a 1936 travel trailer, not much older than the one we are working on. How do you like their Add-A-Room?

Golly, even Sitting Bull worried about the future, and making a good life for our children!
Let's try to make this world a good place for our kids, and take the time to read to them every day.
Posted by LakeConroePenny,TX at 6:45 PM