It was so much more peaceful this morning. I got all the animals fed, out and back in, and the cats tended to, quietly with no interruptions.

I bathed little Sheba, but even though I didn't put her in the cage dryer because of the heat, the hand held brush-drying still made her cough. I held her in a towel, and tried to dry her best I could, then put her back in her cage with towels around her to keep her warm. She was more comfortable like that. As long as she is kept cool, and quiet, she doesn't cough. I got a little more done to Punkie, but I never did finish her. I was worn out.

When Ray arrived he helped me by holding Jakey in a standing position so that I could scissor his legs, and then he held Sheba up so that I could work on her. She was never difficult to groom, but lately she just wants to be left alone.

Having the puppy, Puddin', here, I have to take her out more often, and then they all want to go. So I am taking out the two shifts of dogs quite often.

Ray finished painting the Coronado roof, and I ate my lunch sandwich out there, so that I could hold the extension ladder when needed.

In the afternoon, I cut their nails, primped on them some more, then tried to rest, but they had to go out again.

Claudia called, and she sounds so much stronger than before she got the new liver. Thank you again, wonderful donor!

At 6.00PM Mindi arrived, and we loaded the 7 dogs up in her truck. Whew!! That's over, first thing I did when the truck pulled away was to let the cats out of their cages.

Thought you might get a kick out of this:

Things That Dogs And Puppies Must Always Remember

I will not play tug-of-war with Dad’s underwear when he’s on the toilet.
The garbage collector is NOT stealing our stuff.
I do not need to suddenly stand straight up when I’m lying under the coffee table.
I will not roll my toys behind the fridge.
I must shake the rainwater out of my fur BEFORE entering the house. 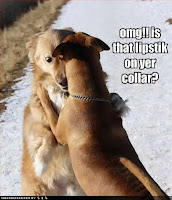 I will not eat the cats’ food, before or after they eat it.
I will stop trying to find the few remaining pieces of clean carpet in the house when I am about to throw up.
I will not throw up in the car.
I will not roll on dead seagulls, fish, crabs, etc.
I will not lick my human’s face after eating animal poop.
“Kitty box crunchies” are not food.
I will not eat any more socks and then redeposit them in the backyard after processing.
The diaper pail is not a cookie jar.
I will not wake Mommy up by sticking my cold, wet nose up her bottom end. 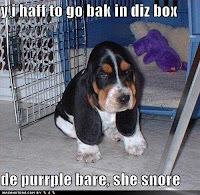 I will not chew my human’s toothbrush and not tell them.
I will not chew crayons or pens, especially not the red ones, or my people will think I am hemorrhaging.
When in the car, I will not insist on having the window rolled down when it’s raining outside.
We do not have a doorbell. I will not bark each time I hear one on TV.
I will not steal my Mom’s underwear and dance all over the back yard with it.
The sofa is not a face towel. Neither are Mom & Dad’s laps.
My head does not belong in the refrigerator.
I will not bite the officer’s hand when he reaches in for Mom’s driver’s license and car registration.
It was a lot warmer today.
Posted by LakeConroePenny,TX at 6:20 PM