Do You Want Ammonia with That? Antibiotics. Paco, Maybe New Home?

"If you're in the beef business, what do you do with all the extra cow parts and trimmings that have traditionally been sold off for use in pet food? You scrape them together into a pink mass, inject them with a chemical to kill the e.coli, and sell them to fast food restaurants to make into hamburgers.

That's what's been happening all across the USA with beef sold to McDonald's, Burger King, school lunches and other fast food restaurants, according to a New York Times article. The beef is injected with ammonia, a chemical commonly used in glass cleaning and window cleaning products.

This is all fine with the USDA, which endorses the procedure as a way to make the hamburger beef "safe" enough to eat. Ammonia kills e.coli, you see, and the USDA doesn't seem to be concerned with the fact that people are eating ammonia in their hamburgers.

Aside from the fact that there's ammonia in the hamburger meat, there's another problem with this company's products: The ammonia doesn't always kill the pathogens. Both e.coli and salmonella have been found contaminating the cow-derived products sold by this company.

This came as a shock to the USDA, which had actually exempted the company's products from pathogen testing and product recalls. Why was it exempted? Because the ammonia injection process was deemed so effective that the meat products were thought to be safe beyond any question.

What else is in there?

"As the NYT reports, "The company says its processed beef, a mashlike substance frozen into blocks or chips, is used in a majority of the hamburger sold nationwide. But it has remained little known outside industry and government circles. Federal officials agreed to the company's request that the ammonia be classified as a 'processing agent' and not an ingredient that would be listed on labels."

Fascinating. So you can inject a beef product with a chemical found in glass cleaning products and simply call it a "processing agent" -- with the full permission and approval of the USDA, no less! Does anyone doubt any longer how deeply embedded the USDA is with the beef industry?

Apparently, this practice of injecting fast food beef with ammonia has been a well-kept secret for years. I never knew this was going on, and this news appears to be new information to virtually everyone. The real shocker is that "a majority" of fast food restaurants use this ammonia-injected cow-derived product in their hamburger meat. It sort of makes you wonder: What else is in there that we don't know about?


"School lunch officials and other customers complained about the taste and smell of the beef," says the NYT. No wonder. It's been pumped full of chemicals.
There are already a thousand reasons not to eat fast food. Make this reason number 1,001. Ammonia. It's not supposed to be there.

You can get the same effect by opening a can of dog food made with beef byproducts, spraying it with ammonia, and swallowing it. That is essentially what you're eating when you order a fast food burger.
It's almost enough to make you want to puke. If you do so, please aim it at your windows, because ammonia cuts through grease like nothing else, leaving your windows squeaky clean! "   Learn more: http://www.naturalnews.com/027872_ammonia_beef_products.html#ixzz1B10R9oeY

Other sources: http://www.nytimes.com/2009/12/31/us/31meat.html?_r=2
and http://www.naturalnews.com/028064_ammonia_beef.html
and "When a product is labeled "100 percent beef," it should not contain . . . the same chemical found in floor cleaners."    From:  http://www.lawyersandsettlements.com/articles/food-supplements/food-poisoning-recalls-false-advertising-3-13399.html

"The Truth: Most fast-food hamburger patties begin their voyage to your buns in the hands of a company called Beef Products. The company specializes in taking slaughterhouse trimmings—heads and hooves and the like—that are traditionally used only in pet food and cooking oil, and turning them into patties. The challenge is getting this byproduct meat clean enough for human consumption, as both E. coli and salmonella like to concentrate themselves in the fatty deposits.

The company has developed a process for killing beef-based pathogens by forcing the ground meat through pipes and exposing it to ammonia gas—the same chemical you might use to clean your bathroom. Not only has the USDA approved the process, but it's also allowed those who sell the beef to keep it hidden from their customers. At Beef Products’ behest, ammonia gas has been deemed a “processing agent” that need not be identified on nutrition labels. Never mind that if ammonia gets on your skin, it can cause severe burning, and if it gets in your eyes, it can blind you. Add to the gross-out factor the fact that after moving through this lengthy industrial process, a single beef patty can consist of cobbled-together pieces from different cows from all over the world—a practice that only increases the odds of contamination.
From: http://health.yahoo.net/experts/eatthis/truth-about-your-weight-gain
_____________________

More about what is in your meat:

"These cattle are eating more than grain -- antibiotics are routinely part of their feed. In factory farms get daily doses of antibiotics, both to keep them alive in their stressful, unsanitary conditions and to make them grow faster. What's the annual volume of antibiotic use on factory farms? The question is a critical one, because the practice has given rise to a novel strain of antibiotic-resistant staph (MRSA), known as ST398, that's widely present in our vast hog and chicken factories.

Well, federal regulators have for years ignored the question and refused to release estimates of just how much antibiotics the livestock industry burns through. But that ended yesterday, when the FDA released its first-ever report on the topic. The answer: 29 million pounds in 2009. According to ace public-health reporter Maryn McKenna, that's a shitload. (I'm paraphrasing her)"
From:
http://www.grist.org/article/food-2010-12-10-fda-reveals-amount-of-antibiotic-use-on-factory-farms

This broad use of antibiotics in your food, makes the antibiotics that your doctor prescribes, more resistant.


“Antibiotic resistance” and “bacterial resistance” are two ways of describing the same thing. Usually, antibiotics kill bacteria or stop them from growing. However, some bacteria have become resistant to some types of antibiotics. This means that the antibiotics no longer work against them. Bacteria become resistant more quickly when antibiotics are used too often or are not used correctly (such as not taking a full course of antibiotics as prescribed by your doctor).
More at: http://familydoctor.org/online/famdocen/home/common/infections/protect/680.html 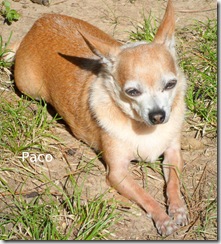 We are not working, even though the weather is warmer than yesterday, but rain is in the forecast.

Paco, my little foster dog, is going to meet some prospective 'parents', during Adoption Day today.

PS:  The people decided that Paco was not THE one, so he came home with me today.
They had already been approved by the SPCA, so if they had wanted to try him out, he would have gone with them today.
Posted by LakeConroePenny,TX at 10:58 AM

I stopped eating meat from factory farms/feed lots. I only eat 100% grass fed. It's not cheap, and so we don't buy it often.

When driving by a feed lot on our travels, I was HORRIFIED by the conditions the feed lot cows are living in. It changed my perception of "farms" instantly.

I couldn't believe the info you posted today. I verified thanks to your sources, and now I'm HORRIFIED that this information isn't splashed across every magazine and newspaper and news program.

Seems like everybody is in bed together. I'm disgusted.

Although I don't eat fast food, this makes me sick AND MAD! This is just criminal! No wonder everyone is dying of cancers. I'm close to choosing to be a vegan!

I hope Paco finds a good home. We are so thankful that we have our Rusty. He has brought so much joy to these two old people.

Thank you for your comments, Nellie, Kathy and Pidge.

I found one more interesting article about the ammonia in beef, so I added it to today's journal: "When a product is labeled "100 percent beef," it should not contain . . . the same chemical found in floor cleaners."
From: http://www.lawyersandsettlements.com/articles/food-supplements/food-poisoning-recalls-false-advertising-3-13399.html

The couple met Paco, but decided that he wasn't THE one, so he is back home with me.

OMG, no wonder people are getting sick from food (me included). Makes you want to quit eating!

I had no idea about the ammonia, but it sure don't surprise me none!

We buy all our beef from a tiny crossroads butcher here that has all local beef that are grazing on our green grassy fields of Wisconsin from the neighboring farmers. It costs more but is worth it!

We look at the stuff in the stores, and it's so artificially red and looks like grey ick when you flip them over.

Thank you for your comments, Sandra and Karen.

Sandra, Don't quit eating, we need you!
There are other sources for real food other than the regular grocery stores. Just have to find them. But I know I won't eat Walmart meat.

Karen, we might have to come up to your corner grocery store to get non-factory farm meat, it sounds wonderful. I wish we had one around here.