Why Hasn't New York Been Attacked Since 9/11? 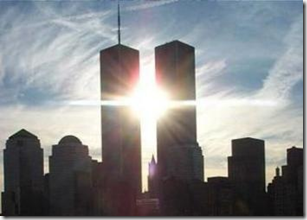 “Today marks six years (now 17) since the attacks on America by Islamic jihadists. On that day America woke up to the reality of an enemy intent on destroying our way of life. That we have not suffered another attack of that magnitude is due to the vigilant efforts of the many within the law enforcement, military and government agencies that sprung to the walls that day. Here is one assessment from the Daily Telegraph :

Why has al-Qa’eda not repeated the attacks it staged in New York and Washington six years ago to the day? Because it can’t. That is the only partly reassuring consensus of some of the experts who tried hardest to warn Washington about the danger posed by al-Qa’eda and militant Islam prior to its devastating strikes on September 11.

Richard Clarke, the anti-terrorism adviser to two American presidents, Michael Sheehan, New York’s former deputy police commissioner who headed the State Department’s anti-terrorism effort, and others who sensed the danger long before it became obvious, assert that offensive and defensive measures taken since that terrible day have not only severely degraded al-Qa’eda’s ability to stage another terrorism “spectacular”, but have made American cities and targets less vulnerable.

Thanks to such steps, “we are safer than we were on September 11, 2001,” John Scott Redd, a retired vice-admiral who now leads the intelligence community’s National Counter-terrorism Centre, told anxious legislators on Capitol Hill yesterday. “But we are not safe,” he added. “Nor are we likely to be for a generation or more.”

This is the great danger we face as a nation, that we will forget the dangers that exist. This enemy has not retreated nor can we afford to let down our guard.

For one brief moment in 2001 the nation forgot the issues that divide and drew together in grief, shock and anger. Remember the scene of the congressmen and women standing on the Capitol steps, arms linked and singing God Bless America?  We are far from that poignant moment.” From: https://www.ucg.org/beyond-today/blogs/why-hasnt-new-york-been-attacked-since-911

The 11th. of September is the Islamic New Year. 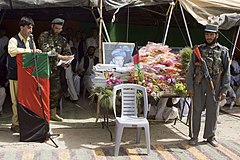 The Top 4 Reasons September 11th is Significant to Islam

Another person who thought they were greater than God!

One of the most profound episodes affecting Church history involved Emperor Constantine and his decrees against God’s laws. Yet the Church of God held fast.

In A.D. 321 Constantine decreed that Sunday would be observed as the Roman day of rest. Jesus Christ warned His followers, “Do not think that I came to bring peace on earth. I did not come to bring peace but a sword” (Matthew 10:34). His words have proven true throughout the centuries, and especially during the fourth century in the Roman Empire.

Another article on Church history discusses the loyalty of Polycarp and Polycrates in their defense of the New Testament Passover being kept on the 14th day of the first month of the Hebrew calendar. But persecutions continued against the Church. This article focuses on the decrees Constantine made regarding his interpretation of religious doctrine and the aftermath of his pronouncements.

Persecution toward the Church

In the years prior to Constantine, a number of Roman emperors had persecuted the Church Jesus established. One such campaign was sanctioned by Emperor Trajan after he received a letter from Pliny (A.D. 111-113). Pliny was a young lawyer and governor over the territory of Bithynia and Pontus, along the southern edge of the Black Sea where some in the Church had originally settled (1 Peter 1:1-2).

Following is a portion of Pliny’s letter:

“It is my practice, my lord, to refer to you all matters concerning which I am in doubt. For who can better give guidance to my hesitation or inform my ignorance? I have never participated in trials of Christians. I therefore do not know what offenses it is the practice to punish or investigate, and to what extent. …

“I have observed the following procedure: I interrogated these as to whether they were Christians; those who confessed I interrogated a second and a third time, threatening them with punishment; those who persisted I ordered executed. For I had no doubt that, whatever the nature of their creed, stubbornness and inflexible obstinacy surely deserve to be punished.”

Trajan responded: “You observed proper procedure, my dear Pliny, in sifting the cases of those who had been denounced to you as Christians. For it is not possible to lay down any general rule to serve as a kind of fixed standard. They are not to be sought out; if they are denounced and proved guilty, they are to be punished, with this reservation, that whoever denies that he is a Christian and really proves it—that is, by worshiping our gods—even though he was under suspicion in the past, shall obtain pardon through repentance.”

So, in the early part of the second century, we see persecution directed toward the Christians in the area of Asia Minor. This persecution continued, but the Church of God remained firm and loyal.”

“As a result of these man-made edicts, a large portion of the world has been following false decrees, but not all people changed their beliefs to worship on Sunday. As persecutions over the Sabbath intensified, members of the Church of God migrated to the west, and history reveals that the Church thrived in the Balkans and Eastern Europe. But that is another story for another article.

In the meantime, take time to confirm what the Bible teaches about the seventh-day Sabbath. The following resources can help: “The Sabbath, Sunday, Every Day or No Day at All?” and “Which Day Is the Seventh Day?”

It has been a hurry-up-and-wait week. First waiting, twice, for the light company to come to make the new mast at the mini-house hot.  When the bucket truck driver arrived he looked it all over, and said that we would have to trim some trees for him to be able to get his bucket through.  I called our Property Owners Assoc. and made sure that it was OK to trim their trees.  He disconnected the power from my old pole to make it safer for us to trim the trees.  Fortunately, as I had sold my gas chain saw because I couldn’t start it, I still have one of those electric Worx tree trimmers with the big jaws.  That made light work of trimming off those branches, but we had to string a heavy duty cord from the main house. 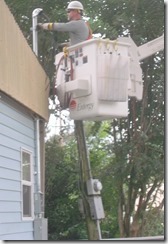 On the bucket truck’s second trip he hooked the wires to the new mast.  That just makes it live to the main breakers in the new breaker box on the outside of the house.  Then the electrician has to come back to run wires from those breakers through a hole he has made into the inside breaker box.  Zack and I removed the old mast, meter can, breaker box and weatherhead off the little temporary pole, which has been there for 23 years.  Then we dug up the conduit covered wires which went from that pole underground into the mini-house.  The electrician plans to re-use that wire to attach the new outside breaker box to the one inside.   Wire really has gone up in price, no wonder thieves like to steal copper wire out of derelict houses.

As we didn’t have power in the mini-house, we took some shelves outside into the carport and Kilzed and painted them out there.  Then one day I went to Conroe Hospital to visit a church friend and do a bit of shopping.

Zack has a habit of not showing up, so I know that if he doesn’t arrive by 8.00 am that he had to work elsewhere.  He doesn’t have a phone or cable.  But, to his credit, he is always here by 7.30 on Sundays, as there is a religious program on TV that he likes to see, Mannafest with Perry Stone.

On Friday, Preparation Day, as I had planned to go to both the morning church on FM 1097 and the afternoon church on FM 830 on the Saturday Sabbath, I made two separate dishes for the potlucks.  They were both made out of organic chicken, lentils and veggies. The first one was a salad with added apples pieces so that the pastor’s wife wouldn’t have to tend to it, and the second one was a hot dish in a crockpot which I could plug in as soon as I got there.

After the service, I stayed a short while to eat a quick bite, talk to my friends and help with the potluck, then drove south to the other church.  The person that I was concerned about at that church, is now in Hospice and did not have chemo nor radiation, he just wishes to go the way God intended with quality, not expensive quantity of life.  The pastor’s Message was about that too.

Everything is still green even though it has been hot because we have had quite a few humid, rainy days.

Posted by LakeConroePenny,TX at 9:41 AM