The Feast of Tabernacles: A Bountiful Harvest.

This is The Week of The Feast of Tabernacles.

The Feast of Tabernacles: A Bountiful Harvest

“The Feast of Tabernacles, during the fall harvest season, pictures 1,000 years of God’s Kingdom on earth. This will be a bountiful spiritual harvest. With Satan removed (pictured by Atonement) and Jesus Christ reigning as King of Kings (pictured by the Feast of Trumpets), the knowledge of God will spread around the world. Those who were faithful to God will serve with Jesus Christ in teaching and administering His way of life for 1,000 years (Revelation 20:4).

Consider some of the prophecies of this time of peace and prosperity that will result from living God’s way of life:

“For out of Zion shall go forth the law, and the word of the LORD from Jerusalem. He shall judge between the nations, and rebuke many people; they shall beat their swords into plowshares, and their spears into pruning hooks; nation shall not lift up sword against nation, neither shall they learn war anymore” (Isaiah 2:2-4).

“They shall not hurt nor destroy in all My holy mountain, for the earth shall be full of the knowledge of the LORD as the waters cover the sea” (Isaiah 11:9).

These and many other Bible passages paint a beautiful picture of good news about this coming millennial reign of Jesus Christ that will inaugurate the eternal Kingdom of God.

Past and future celebrations of the Feast of Tabernacles

The Feast of Tabernacles was so important to Jesus Christ that He went to Jerusalem to celebrate it even though He knew His life would be in danger (John 7:1-26).

And the Feast of Tabernacles is destined to be a major international festival of the Kingdom of God, celebrated even by nations that resisted it at first (Zechariah 14:16-19).

Since Jesus Christ celebrated the Feast of Tabernacles, and since He will force people to honor it in the future, it only makes sense for us to celebrate it today.

The name “Feast of Tabernacles” comes from the tabernacles or temporary dwellings that God commands His people to stay in during this seven-day festival. These temporary living quarters rehearsed the exodus from Egypt, but also serve as a reminder of the temporary nature of our physical life (Leviticus 23:43; 2 Peter 1:13-15). This helps us realize this physical life is not all there is, which helps us focus on those things that are eternal (2 Peter 3:10-13).

As much as everyone will enjoy the time of peace and prosperity, the real accomplishment of this 1,000 years will be in the people who fully commit themselves to God, repent and seek first His Kingdom and righteousness. We believe a large harvest of future children of God will come from this time in history.

However large this harvest is, it seems it will not be as large as the harvest at the seventh step in God’s plan, pictured by the Eighth Day or Last Great Day.

“And I saw thrones, and they sat on them, and judgment was committed to them. Then I saw the souls of those who had been beheaded for their witness to Jesus and for the word of God, who had not worshiped the beast or his image, and had not received his mark on their foreheads or on their hands. And they lived and reigned with Christ for a thousand years.

The faithful followers of Jesus Christ will be resurrected or changed to immortality at Christ’s second coming and will help Him set up the Kingdom of God to rule over the earth (Revelation 5:10). This thousand-year rule has become known as the Millennium, from the Latin word for a thousand years. Although not all people will immediately accept Christ as King of kings, it will quickly grow to be a time of peace and prosperity as people see that following God’s laws brings beneficial results. This utopian time is pictured by the annual Feast of Tabernacles,”

When Was Jesus Born?  Was it really on December 25th?  No, During Feast of Tabernacles. 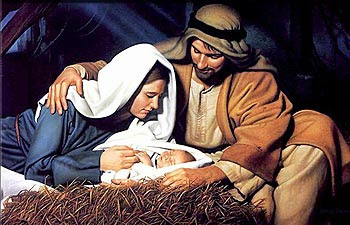 According to Luke 1:24-26, Mary conceived Jesus in the sixth month of Elizabeth’s pregnancy with John the Baptist. This means that Jesus was born 15 months after the angel Gabriel appeared to Elizabeth’s husband, Zacharias, and informed him that his wife would bear a child.

According to Luke 1:5, Zacharias was a priest of the division of Abijah. Luke 1:8 says that Gabriel appeared to Zacharias while he was serving as a priest in the Temple.

Fifteen months later would place the birth of Jesus in the seventh month of the Jewish calendar. That would be in the fall of the year, in either late September or early October. His conception, not His birth, would have occurred in December of the previous year.

The seventh month of the Jewish calendar is the month of the Feast of Tabernacles. John 1:14, speaking of Jesus as the Word, says: “And the Word became flesh and dwelt among us, full of grace and truth.” The word “dwelt” that is used here is the Greek word “skenoo” which literally means “to tabernacle”!

The total meaning of that feast will not be fulfilled until the Lord returns again to tabernacle among Men for a thousand years while He reigns over the earth from Mt. Zion in Jerusalem. Isn’t the Word of God marvelous?”  More at: http://christinprophecy.org/articles/when-was-jesus-born/

This week my young neighbor helped me with a few jobs around here again, but nothing was done to the mini-house as he doesn’t do plumbing, electrical or carpentry.

Sometimes it was frustrating this week.  If you put your automatic vehicle in any gear but P or N, it won’t start will it?  It just does nothing!  Well my van suddenly did the same thing that it did a while back.  It did nothing even when in P or N, no noise, no nothing!  So Thursday I waited three hours for a wrecker outside Conroe Krogers with my friend Chris.  At 7.00 pm we told the Emergency Road Service to postpone it, and Chris took me home.  I was very upset because the ERS was sending a wrecker out of Houston, 38 miles away when there are 18 wrecker services in Conroe.  The next day we set out early and the wrecker arrived prompty and the van was taken to the place that ‘fixed’ it before.  BUT, now the van started right away.  Now that is crazy.  It seems that whatever locks it up, unlocks it as soon as the van is towed.  This is the second time it has done this.  The mechaninc can’t fix it when it is working right.

Friday morning, while I was in the wrecker showing him the way to the repair shop I got two phone calls.  I had forgotten that I was supposed to be at church in half an hour for our start of the celebration of The Feast of Tabernacles.  I had to go dressed as I was, with no food offering.  Chris was following the wrecker so that she could take me home, but she took me to church instead.  Another lady at church lives on my road, so she brought me home.

The Friday Bible readings were Psa. 105, Lev. 22:26-23:44, about the Feasts, Zech.14:1-21, and the Teaching was about The Seven Feasts of Yahweh which Jesus and the disciples observed, and we should too.  The Feasts are all about Jesus.

Hans, my German neighbor, took me to church on Saturday, the Sabbath, and stayed for the service.  He likes our services.  I didn’t have any food prepared for the church potluck, and as we are not supposed to work on the Sabbath, I grabbed a big container of leftover frozen cooked Beef and Veggies, and a crockpot.  It defrosted nicely in the crockpot during the service.  But our potluck didn’t do too well as the oven started acting up.  The pastor’s wife did what she could with moving the food out of the metal oven pans onto pyrex dishes and reheating them in the microwave.  We all had a good dinner anyway, and fun time talking.

Another phone call was from Roy.  He and his friend were staying clean, and he wanted to work some mornings as he had the use of a car, so I let him start work on the mini-house again on Sunday.

Posted by LakeConroePenny,TX at 4:58 PM