When Was Jesus Born? Part 2. Cause and Effect. Beyond Ruts. Update

When Was Jesus Born? Part 2

"Luke 2:1 And it came to pass in those days that a decree went out from Caesar Augustus that all the world should be registered. 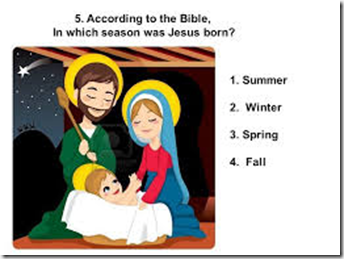 The vast Roman Empire was a structured and expensive government, and this census was “organized to facilitate the collection of taxes” (NKJV Study Bible). In an agrarian society, both tithes and taxes were collected shortly after the fall harvest when the farmer would have sold his crop. Collecting taxes in the winter or any other time is not very effective.

Also, since such a census required people like Joseph to travel back to their ancestral home, it is unlikely the census would have been conducted in the winter time when travel was difficult. This is but one more hint in the text that Jesus Christ’s birth did not occur on Dec. 25. Though the Bible does not give an exact date for His birth, it seems clear that it could not have been in the winter.

For more about why Jesus Christ’s birth could not have been Dec. 25 and how it came to be celebrated that day, see our article “Christmas: Should Christians Celebrate It?”" by Mike Bennett

Cause and Effect in Prophecy

“Now it shall come to pass, if you diligently obey the voice of the LORD your God, to observe carefully all His commandments which I command you today, that the LORD your God will set you high above all nations of the earth. …

“But it shall come to pass, if you do not obey the voice of the LORD your God, to observe carefully all His commandments and His statutes which I command you today, that all these curses will come upon you and overtake you. …”

Bible prophecy, and the Bible as a whole, teaches us the principle of cause and effect. Obeying God’s good and beneficial laws ultimately leads to wonderful blessings. Disobeying—sinning—ultimately leads to the horrible curses described in Deuteronomy 28.

This is a sure and certain principle—there are predictable consequences to our actions, physically and spiritually.

So why does humanity so easily forget this inevitable truth? Because under the sway of Satan, we have learned to postpone some of the bad consequences, and Satan has used his enormous powers of deception to make the bad look good and the good, bad. He tricks us into thinking there are shortcuts—that we can escape the consequences.

But God wants us to take the long view—to see through the deception to the ultimate reality. He gives us His laws and Bible prophecy so we can see what will cause suffering and what will cause real joy and happiness. Choose life!

For more about the purposes of Bible prophecy, see “Purpose of Prophecy.”"

An Amazing Fact: The distance between train-track rails, better known as the U.S. railroad gauge, is an odd 4 feet, 8.5 inches. Why? Because that’s the way they built them in England, and English expatriates built the U.S. railroads.

But why did the English build them that size? Well, the first rail lines were built by those who built horse-drawn tramways, and they simply used the same gauge. And they used that gauge because the people who built the tramways used the same jigs and tools used for building wagons—which use that wheel spacing.

But why did the wagons use that odd wheel spacing? If they tried to use any other spacing, the wagons wheels would break because they did not fit in the old road ruts. So who built these old rutted roads? The first long-distance roads in Europe were built by Imperial Rome for the benefit of their legions. And the ruts? They were first made for Roman war chariots—and they used the 4 feet, 8.5 inches measurement. They were all alike in the matter of wheel spacing.

But why that width? They were made to be just wide enough to accommodate the back-ends of two warhorses. Alas, the influence of old ruts tends to live on forever. The writer of Hebrews warns us about the perils of not moving forward in our Christian lives. “Therefore, leaving the discussion of the elementary principles of Christ, let us go on to perfection” (Hebrews 6:1). The word “perfection” can mean “fullness” or “maturity.”

As we choose to walk with Jesus every day, we will grow and develop. We will not follow old paths without making sure we know and understand those ways. Practicing a tradition might seem right, but if it does not square with the Bible, we might be doing something only because “that’s the way we’ve always done it before.” That’s how train track rails were once laid. So ask yourself, “Am I going down the right track?”
KEY BIBLE TEXTS
And beside this, giving all diligence, add to your faith virtue; and to virtue knowledge; 2 Peter 1:5"

Well, it's back to just Jay and me working on the guest house.  Mostly we have been concentrating on digging and sinking barriers to keep the rain from getting under one end of the guest house.   The water could not dry out very quickly as the Property Owners Assoc. haven't been cutting their hedge and that might have contributed to the floor rotting.  The guest house is on the corner, so the hedge is theirs.  Since they let that hedge grow as tall as the house there has been no sun to dry anything out.

We bought 12 ft' long Hardie planks (cement boards), which just fit in my van, dug trenches right outside my fence, then also right up against the house and inserted the Hardie planks, on edge, for barriers.  Some places we installed 8" wide and others 12" wide.  To test if we were getting anywhere we put little scraps of used sheetrock under that side of the house in different places to see if they would get damp.  That's one advantage of not having screwed the new floor down yet, we can see what is going on under it.  We had a real gulley-whomper that even flooded the road below me, but our first completed section didn't show any signs of damp.  More thunderstorms are expected later this week, so we hope to get it all done before then, so we can test it.  When we are satisfied, we will put down the sub barrier and screw down the floor.

Jay went to church with me.  Then as we were giving a ride to another lady we had to re-install one more seat in my van.  Usually we only have the two front seats so that we can carry plywood and sheetrock.  Jeff, our guitarist was away on a filming job, so there were tapes for the music.  We were having  Thanksgiving dinner for the potluck.

Usually there is cornbread stuffing, but I don't eat corn of any kind because most of it is genetically modified with Round-Up and sprayed with other chemicals.  There are others in the congregation who I knew wouldn't eat it either.   http://www.nongmoproject.org/learn-more/sweetcorn/ and http://gmo-awareness.com/resources/glyphosate/.  So I made some stuffing for the very first time, but with Ezekiel Sesame Bread, (no flour, made from sprouted seeds and grains) and homemade chicken bone broth, onion, celery, raisins, etc).  Everyone said that it was good.  I also made a custard with some Mexican cinnamon cookies embedded in it.  I was given the carcass of the organic turkey to make bone broth.

It was cold with a chilly wind, so I was glad that I had taken an extra sweater to wear and a jacket to loan out to another cold soul.  There weren't very many there, but we all had a happy, joyful and blessed time, fellowship and a great day.

Posted by LakeConroePenny,TX at 3:05 PM

I don't eat corn either, but my reasons are a little different. Corn has mold which produce toxins that can poison us. Also, corn has been linked to 17 different kinds of cancer, especially when turned into alcohol (grin).

I just read up about that.
Thanks for the info.
I know I won't eat corn again!
Happy Tails and Trails, Penny