A Forgotten Memorial Day: The Feast of Pentecost

"Monday is Memorial Day in the U.S. But there is another memorial day this weekend that commemorates one of the most momentous days in all of history. 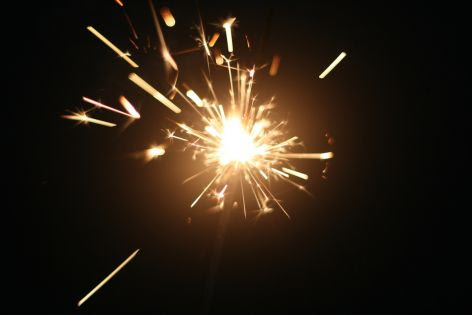 On Monday, May 25, most schools, federal offices and some businesses in the United States will be closed to observe Memorial Day. Memorial Day is a U.S. holiday remembering the Americans who died in all the wars fought throughout American history—perhaps 660,000 people.

But this coming weekend should mean more to us than just a three-day weekend of picnics and parades. In fact, this particular weekend is actually special for another reason. This Sunday, May 24, is a day even more important than Memorial Day—it is the biblical Feast of Pentecost (or Feast of Weeks).

The unique feast of counting

In Leviticus 23 God gave Israel a list of special observances that He declared “the feasts of the LORD” (verse 2). These festivals were to be observed by God’s people as “holy convocations” (verse 2). Israel was to assemble together on these days to worship and learn.

The third festival in this list was unique. Instead of having a fixed date, the date of its observance was based on counting: “You shall count for yourselves from the day after the Sabbath [during the Days of Unleavened Bread], from the day that you brought the sheaf of the wave offering: seven Sabbaths shall be completed. Count fifty days to the day after the seventh Sabbath” (verses 15-16). In fact, the name Pentecost is simply the Greek term for “fiftieth.”

This year, the counting began on April 5. Counting 50 days forward brings us to this Sunday, May 24."

"Pentecost marked the giving of the Holy Spirit and the founding of the Church. What does this harvest festival show about God’s plan of salvation?

Pentecost, or the Feast of Weeks, is one of the harvest festivals that represent the plan of salvation.

Jesus’ crucifixion on Passover was a pivotal event in history. And just over seven weeks later, another watershed event occurred on the Feast of Pentecost.

“When the Day of Pentecost had fully come, they were all with one accord in one place. And suddenly there came a sound from heaven, as of a rushing mighty wind, and it filled the whole house where they were sitting. Then there appeared to them divided tongues, as of fire, and one sat upon each of them. And they were all filled with the Holy Spirit and began to speak with other tongues, as the Spirit gave them utterance” (Acts 2:1-4; for more about the miracle of speaking in tongues, see the article “What Is Speaking in Tongues?”).

During His ministry, Jesus Christ had told His disciples about the power of His Holy Spirit that they would need and would receive. By faithfully obeying God’s command to gather on His feasts, they were ready to receive this miracle.

“‘Therefore let all the house of Israel know assuredly that God has made this Jesus, whom you crucified, both Lord and Christ.’ Now when they heard this, they were cut to the heart, and said to Peter and the rest of the apostles, ‘Men and brethren, what shall we do?’

“Then Peter said to them, ‘Repent, and let every one of you be baptized in the name of Jesus Christ for the remission of sins; and you shall receive the gift of the Holy Spirit. …’

“Then those who gladly received his word were baptized; and that day about three thousand souls were added to them” "(Acts 2:36-38, 41).

What Will the Vatican’s Recognition of Palestine Mean?

The pope’s recognition of a Palestinian state was denounced by Israel, but what will its impact in Europe and the Mideast be? How will peace really come?

The Vatican signed a treaty recognizing a Palestinian state Wednesday, May 13.

The National Catholic Reporter said, “The move comes four days before the canonization of two Palestinian nuns and solidifies the standing of Palestinian President Mahmoud Abbas, who is scheduled to meet with Pope Francis at the Vatican on Saturday.

“Israeli Foreign Ministry spokesman Emmanuel Nahshon told The Times of Israel that the government is ‘disappointed by the decision. We believe that such a decision is not conducive to bringing the Palestinians back to the negotiating table.’

“Israel insists that for the Palestinians to achieve statehood, they must first end their armed struggle against Israel and recognize its right to exist as the homeland of the Jewish people.”

Journalist Julian Pecquet wrote May 13, “From the beginning of his papacy Pope Francis hasn’t hesitated to jump into the bloody politics of the Middle East, starting with his September 2013 appeal for a day of fasting and prayer to protest the planned US military strikes on Syria. Since then he has recognized the Armenian slaughter of 1915 as a genocide and repeatedly called for peace in the region, all in the name of defusing conflicts that threaten to tear apart a rich mosaic of cultures in which Christians once thrived.

“‘We cannot resign ourselves to a Middle East without Christians, who have professed the name of Jesus there for [2,000] years,’ The New York Times quoted the pope as saying during his visit to Turkey last year.”

Monday, Jay and I borrowed his mother's truck and got the 4x4's out of my van which is still in the shop.

Jay said that he could make his mother's washer spin, so we didn't take it to the repair shop.  While we were out, I bought trip tags for the Puddle Jumper at the courthouse.  We returned the 4x4's to Lowes and bought chain link top rail. The swaged end will fit in the parts of the carport canopy.

Tuesday, BabyGirl's adopters couldn't wait until Thursday to get their new dog, so Chris and I took her to meet them at Petco.  All the forms were filled in and she is now theirs.  They have a lovely house and a salt-water pool.  They brought their other dog and he and BabyGirl got along great and even played a bit.  We are all so happy for her.

Wednesday, the Puddle Jumper had it's new muffler installed in Conroe, and Jay and I did a bit of thrift shopping, too.  I bought another shredder, and he bought some shirts.  It was very strange to drive the little Puddle Jumper out on the road, and as it hasn't left the subdivision in 6 years it smoked when it was first driven over 20 miles an hour.  Once it got all the soot off the cylinders and valves, it ran like a top.

Thursday, before it started to rain again, we put two of the new long poles (top rail) in the car canopy.  We are raising it 18" so that it can accommodate my motor home.  Jay drilled 1-3/8" holes in the treated 2x4's that we had laid out, and pounded the poles through, about 2 ft. into the ground.  That canopy is anchored! 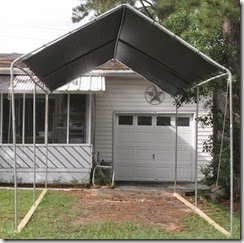 Friday, we finished the carport. Here it is now.

Then, I went to lunch with my granddaughter at a very different place in Willis called YummyYummy.  They give you a bowl and you go through a buffet getting what you want.  I didn't really know what was going on, or I would have got some raw broccoli, cabbage, and cod, etc.  At the end of the buffet they take your bowl away from you and put the contents on a big grill.  You have a choice of different noodles and rice.  They give you a number and then your cooked food is brought to you. It was good, and enough to bring some home.

Over the weekend, Jay couldn't make his mother's washer spin any more, so we spun their washed clothes here.  I see a trip to the repair shop in the future after all.

Then we heard about the dam being weak at Lewis Creek Reservoir.  It will really affect me if it breaks, as I am at the highest place around and will get inundated with people!!  I have already been told by many "If we have to leave, we are coming to your place!!"  One RVer just left, she wanted to see where she could park her 42" motor home on my side lot!! The Corps of Engineers and Entergy are doing all they can to stop the dam from breaking. The reservoir was built to cool Entergy's power plant. Jay and his mother's houses will be in jeopardy as they are down by Lake Conroe.

The potluck was great, as usual.  Lots of fellowship and friendship.  One couple are full timers (live fulltime in their RV) and they are headed for Oregon.  We will miss them until they return to Thousand Trails Conroe next year. Some were staying for the evening Pentecost service. Some left and returned.  As we share the buildings with a Baptist church, we cannot use it on Sundays.

Pentecost, like all the Holy Days, begins at sunset, so we had a small service after dusk.  I don't drive after dark so a church member who lives just past my house took me back at 7.30 for the evening service.  We had another great meal after the service and we didn't leave until after 10.00 pm. A really full and happy day.

Posted by LakeConroePenny,TX at 7:19 PM