San Marcos, TX. A Cattle Queen Ahead Of Her Time.

This is the second post today, the cable was just fixed.  The IP address had mistakenly been turned off at the cable office.  Whatever next.

For "Travel Tuesday:
This is in The Hill Country of TX:

The northern end of The Prime Outlets Malls at San Marcos, Texas.

"San Marcos is a city in the U.S. state of Texas, and is the county seat of Hays County. San Marcos is located on the Interstate 35 corridor, between Austin and San Antonio. Founded on the banks of the San Marcos River, the area is considered to be among the oldest continuously inhabited sites in the Northern Hemisphere. San Marcos is home to Texas State University-San Marcos, and the Aquarena Center. The population was 50,371 in 2008.

The culture of San Marcos is greatly enriched by the city's diversity. Home to a growing Hispanic population, and a small but influential African-American population, the city hosts many annual events that highlight its different cultures, such as the annual VIVA! Cinco de May Celebration, the Texas Natural & Western Swing Festival, Juneteenth celebrations, and the Sights and Sounds of Christmas.

First United Methodist Church San Marcos benefits greatly by the presence of Texas State University and its large student population. The influx of youth contributes toward keeping the city vibrant, as exemplified by a thriving music scene. In addition, the university and local school district provide many opportunities for entertainment through the various student artistic productions, and athletic events.

Those in San Marcos enjoy a life centered greatly around nature. The presence of the pristine San Marcos River and an ample city park system provide plentiful outdoor opportunities. The admiration for nature lends to a city pride in its scenic natural beauty, and the unique and endangered species which also call San Marcos home.

The Square
San Marcos's town center was laid out in 1851. The square was recently the focus of a multi-million dollar restoration project. It is also one of the primary sources of entertainment for Texas State students.
Education

A notable Lady from Hays County:

"Elizabeth Williams (1840–1924), usually known as Lizzie, started her career as a teacher, an author, and a bookkeeper and ultimately became a wealthy businesswoman. 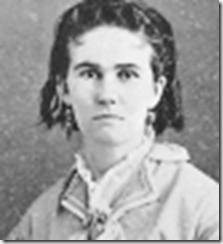 "We celebrate Women’s History Month and the many contributions generations of women have made to the fabric and culture of this great country. Texas has been home to scores of influential, intelligent, colorful and unforgettable females. From Emily West, the Yellow Rose of Texas, to Bessie Coleman, the nation’s first African American female aviator, and down the line to political trailblazers like U.S. Representative Barbara Jordan, U.S. Senator Kay Bailey Hutchison and Texas’ 45th Governor, Ann Richards—Texas is no stranger to powerful and strong women.

One of these was Elizabeth “Lizzie” Ellen Johnson, a young woman from Hays County, Texas, who did not let social norms of the day stop her from pursuing her dreams. Born on May 9, 1840, in Cole County, Missouri, Johnson and her family relocated to Hays County in the mid-1840s, where Mr. and Mrs. Johnson established the Johnson Institute, a private secondary school. After attending the Johnson Institute, Lizzie Johnson began teaching there and at several other schools in Central Texas.

Though she continued teaching, she also took on bookkeeping duties for several well known cattlemen, such as George W. Littlefield and William H. Day. On top of these responsibilities, she found yet another way to earn extra money—by moonlighting as a freelance writer. Using a pen name, she wrote articles of short fiction for magazines and newspapers, such as Illustrated Weekly. Over time, she earned and saved enough money to invest in something she had observed and determine lucrative—cattle. Johnson first invested in a Chicago cattle company, and after three years, she had made significant profits that she in turn used to buy cattle and land.

Johnson registered her cattle brand on June 1, 1871, under the name of Elizabeth Johnson. She then purchased 10 acres in Austin – paying $3,000 in gold dollars. According to some historical accounts, Johnson was able to grow her herd during the Civil War by overseeing a process called “brushpopping.”
With so many men away at war, and with few fences to keep cattle corralled, the population of unbranded cattle in the brush of South Texas began to flourish. During those times, unbranded cattle were “finders’ keepers” for those willing to round them up and transport them. Johnson employed hands to do her “brushpopping” for her – or combing the thicket for cattle.

In 1879, Johnson, tall and striking, married preacher and widower Hezekiah “Hez” G. Williams. While it is reported that Johnson cared deeply for Williams, she did not let her heart rule her business decisions and convinced him to sign a prenuptial agreement. During the course of their marriage, Williams would often make poor business decisions, and Johnson would agree to bail him out of his financial binds. But once he earned his money back, she expected him to repay her.

A woman who marched to the beat of her own drum, Johnson is perhaps best remembered for the literal trail she blazed when she became the first woman in Texas to drive her own herd of cattle up the Chisholm Trail. It is said that Williams accompanied her but drove his own, separate herd. It was in this way that they would lead the rest of their married life – together but separate.

Successful in business—due mostly to Johnson’s acumen—the couple enjoyed traveling and Johnson had a love for fine clothes and the newest fashion trends. When Williams passed away in El Paso in 1914, it is said that Johnson purchased a $600, top-of-the-line coffin for him, and when she signed the bill of payment, she wrote across it, “I loved this old buzzard this much.”

In her final years, Johnson became somewhat of a recluse. She often dressed as if she were impoverished and survived on a meager diet of soup and crackers. For these reasons, when Johnson passed away on October 9, 1924, it came as quite a surprise to Austinites to learn she left behind a fortune of nearly $250,000. Family members found thousands of dollars in diamonds locked away in her basement and other colorful items like exotic parrot feathers around her house.

Lizzie Johnson was a successful businesswoman, investor, cattle dealer and landowner – long before it was considered acceptable for a woman to enter these arenas. Her feisty determination, confidence and self-respect drove her to excel in a man’s world. Thanks to her contributions, Johnson paved the way for generations of Texas women to push the limits and pursue their dreams." By U.S. Sen. John Cornyn. TX.
Sources: Texas State Historical Association; The Cowgirls by Joyce Gibson Roach; Celebrating Texas distributed by McDougal Littell; Womenintexashistory.org, a project of The Ruthe Winegarten Memorial Foundation for Texas Women's History.  From: http://www.setexasrecord.com/news/233891-texas-times-a-cattle-queen-ahead-of-her-time
_______________

It started out cold and rainy, but it had quit raining by the time I was walking Misty down at Jay's place.  But my feet and socks got damp from the wet grass.

Jay and I started installing the new storm door over the back door of Ray's utility room.  This is on the north side, so it gets the full brunt of the Canadian winds rushing across the fields behind my house.

We started out thinking this was going to be an easy job, and I said to Jay as he grabbed a cordless screw gun, that I had better get the little red black wagon.  He said "Oh, we won't need that", but by the time we quit we had to have it to truck all the tools, level, screws, nails and parts back to the workshop.

I was the 'gofer', so I was the one who was having to go out of Ray's back yard, through my patio area behind the RVport, then through the length of my back yard around to the workshop back door to get each extra tool that we needed.  This meant going through 3 gates, but as long as I didn't let Misty out, we could leave them open while we working.

After an hour I realized that I was still wearing my wet shoes and socks, so I changed them and took some Vitamin C, and D to try to ward off a cold.

The vinyl trim had to be taken off around the door frame, and some of the vinyl siding loosened, as the door frame wasn't exposed.   Then the back door and frame to the utility room wasn't standard height, so we had to do some southern engineering and sawing.  We made some special spacer boards on the table saw.  By the time we had rounded up some more white vinyl siding from my stash, it was getting colder by the minute, so we quit for the day.

We might not be able to finish it yet, as the weather isn't supposed to be much warmer today.
Posted by LakeConroePenny,TX at 1:15 PM