Jake and Shari, on the left

I was in IVR2 chat room last night looking for Jake, as I have known him for some years and I knew that he was evacuating from his house on High Island, east of Galveston. I had emailed him and offered to let them come here, and had not heard from him. Low and behold I find out from Arby that the four of them are holed up, in their motor homes at the KOA between Conroe and Montgomery, maybe 25 miles from me. So I could go see them.

I left instructions with Ray that he could 'bleach/Super Clean/water' the rest of the fence with the pump-up sprayer, Shay said he could use her pressure washer, and off I went. I had left a message on Jake's phone before I left, and he returned my call as I was on my way there.

We had a good reunion, it was hugs all the way around, and we were so glad to see each other again, especially under better circumstances. The last time I was at High Island, plugged in at their house, was when I was down there to see my dying granddaughter in UTMB Galveston Hospital. She had been hit by a DDD (dam drunk driver). I had my dying little dog with me, who was slated to be PTS the next day, as he had inoperable spleen cancer. I had to unplug my motor home and pull out in the middle of the night to find an emergency animal hospital, as he was obviously suffering, even with the pain meds he was on. So it was great to see Jake and Shari under normal circumstances.

So today, I finally got to meet Arby and his sweet wife Blondie. Jake has a lovely Kountry Star, with two slides, and Arby has a lovely Monaco with four slides, as they fulltime. The only difference I could really see in the amount of room between the two was that Arby has one more couch, in the area where Jake's door is, as you enter Arby's way up front like a bus, right in front of the passenger seat. Jake's you enter behind the passenger seat. Both beautiful motor homes, but bigger than I would want to drive now. I used to drive 40 ft. bus conversions years ago, like in the late 70's, but I wouldn't want to do it again at my age.

After we all said our hugging goodbyes, I went to WalMart and got some shopping done, including a new pressure washer. It was just like the one I had before the Sears one I have now, and it was on sale. $50, you can't beat that.

I quickly stopped at Lowe's garden center and bought 10 treated fence boards, and as I had cold stuff in the truck I drove home with no more stops. 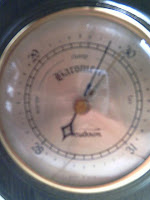 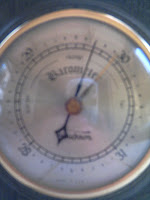 Pressure still dropping as the remnants of Gustav go north west. First picture is yesterday afternoon, and second is this afternoon. But we don't have storms, or rain....yet.

An enjoyable day.
Posted by LakeConroePenny,TX at 5:54 PM

I'm so excited for you that you got to see Jake and Arby and their wives! Good for you, going out and seeing them.