Do You Want Meat With That? Staph In Meat. Antibiotics in Meat. Organic? Still Hot!

"Think You Know Where Your Meat Comes From? Think Again..." Narrated By Alec Baldwin
These are some of the scenes that are also in the documentary "Food, Inc."
"Shows how chickens, turkeys, cows and pigs are treated before they get to your table." 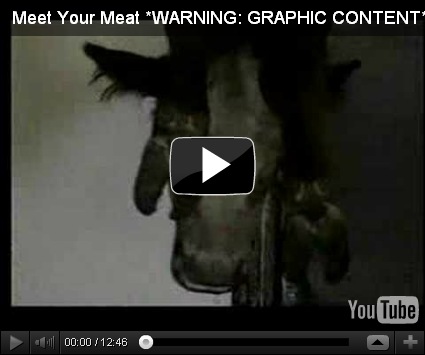 Farm To Fridge – The Truth Behind Meat Production.
"This powerful film takes viewers on an eye-opening exploration behind the closed doors of the nation's largest industrial farms, hatcheries, and slaughter plants -- revealing the often-unseen journey that animals make from Farm to Fridge."


"Surely therefore it is true that a misused, badly treated, dirty, badly fed animal will produce unclean meat.
When you eat that animal, you are consuming it’s history.
Surely then we should be deeply concerned about the animal’s condition if we are to consume it?"
__________________ 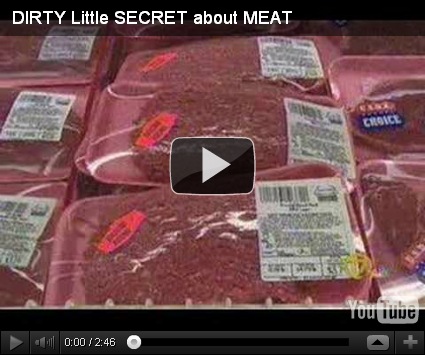 "70% of ALL Beef and Chicken has been treated with Carbon Monoxide Gas. It makes bad meat look good even though it may have spoiled. The practice of treating meat with carbon monoxide could hide the growth of pathogens such as Clostridium Botulinum, Salmonella and E. coli O157:H7.
How many people have become poisoned by this chemical technique that creates a false appearance of freshness?
Why have we not been told about this chemically altered meat that we are eating and feeding our children?
Our Government works on behalf of big business NOT for The People Of America!
The FDA approved the practice as safe for use with packaged in July 2004 in response to requests from two food companies. The EU prohibits food companies from using carbon monoxide."
____________________

Staph Bacteria Found in Half of U.S. Meat

"What's lurking in the meat you're buying for your family? Plenty of bacteria, according to a new study, published in the journal Clinical Infectious Diseases. Almost half of all the beef, chicken, pork, and turkey bought in five U.S. cities and sampled by researchers, was found to contain drug-resistant strains of Staphylococcus aureus, reports CBS News.
"Staph" bacteria is nothing to fool around with-it can cause everything from a rash to life-threatening sepsis and endocarditis.
But there is perhaps no greater contributor to the rise of drug-resistant staphs than the factory-farm meat industry, where animals are preemptively treated with a range of antibiotics.
And because we've consumed so many antibiotics, the staph bacteria isn't easily controllable by drugs. In fact, in the tests done by study researchers at the Translational Genomics Research Institute, 47 percent of the meat contained bacteria resistant to three types of antibiotics."

NO! No! I will not eat factory farmed meat.


"If we aren't supposed to eat animals, why are they made of meat?" 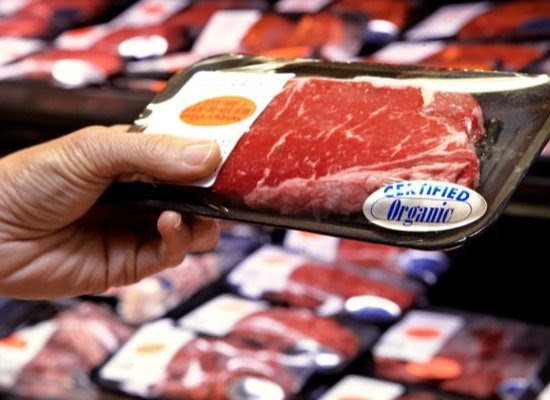 "A recent USDA Inspector General report found that the government is failing to even test meat for the harmful chemicals the law requires. Raising animals with conventional modern methods often means using hormones to speed up growth, antibiotics to resist disease on crowded feed lots and both pesticides and chemical fertilizers to grow the grain fed to the animals.

Searching out cuts from grass-fed animals ensures that you're eating meat from an animal that was fed a more natural diet, and looking for a local source of meats lets you question the farmer directly about the animal's diet and the farmer's method of raising it.

It cuts down on the environmental cost of transportation, too."

Jay was having trouble getting their dishwasher hooked back up, and asked for my help.  The fitting that he had used to cap off the line while the dishwasher was at the repair place, had ruined the existing fitting, so he needed another fitting.  I was all ready to to go down there, Misty already leashed as she likes to go there too, when the doorbell rang. 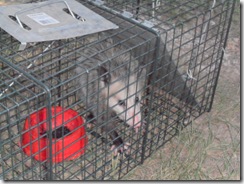 It was Ray wanting to borrow the little Puddle Jumper station wagon.   He had caught a little possum in the trap, and wanted to take it over the bridge to the other side of the subdivision to let it loose at that part of the lake.
Then I remembered that someone had left a door on the Puddle Jumper not quite latched, and the battery was dead, as there are 6 lights in it.  Because it never leaves the subdivision, it doesn't always get driven enough distance to keep the battery at a full charge.

So Ray moved our 'trap cardboard' from the Puddle Jumper to the minivan, and Ray, Misty, possum and I went down there.  Misty, Jay and I reviewed the dishwasher situation while Ray went on to the lake.  He could have let the possum loose at the boat ramp on our side of the bridge, but we always feel that they won't find their way back so easily if we let them loose on the other side.

By the time Ray was back from the lake, Jay and I had figured out what parts we needed and we all piled back in the minivan, sans possum, and came back here.  Jay and I went back down there, sans Ray and Misty, but with my box of Qest and Flair-It fittings.  I had exactly what he needed, so he fixed that, and I could come home.

Ray and I did several odd jobs. We worked on the back door of the cargo trailer, the hinge needed some more bolts and acorn nuts on it.

Because the metal door going from my house into the attached workshop was binding due to this drought, people, not me, were slamming it.  This caused a picture on an adjacent wall to tilt.  Because it was so hard to open, I rarely closed it all the way, and just prayed for rain soon.  So it was leaking hot air out of the workshop into the house.  Ray and I found a stud in that wall, and re-hung the picture properly, and sanded off the part of the jamb which was binding, so the door opens and closes easily now. 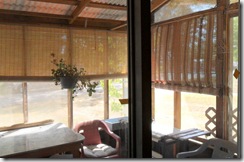 The afternoon sun has really been pouring in on the screen porch, which is through a patio door in the front of the living room.
Ray and I found long and short reed blinds up in the attic, and now there is more shade.  That should keep some heat out of the porch and house, and I am sure that plants are glad of it, too.

It has been so stuffy at 5.30 AM in the mornings that Prime and Bobbiecat have not even been able to go out on the screen porch for a couple of hours, like they usually do.  They like to watch the birds come for their breakfast at the feeder.  Prime just sits up on a chair in the living room, and longingly looks through the patio door.

We are doing everything we can to keep cool these days.

Posted by LakeConroePenny,TX at 6:50 AM

Maybe you should paint its tail red so you will know if it comes back home. I swear that when I trapped and released them a coupld of miles away that they all came back.

I sure hope it cools down by the time I get to Texas at the end of September!

Hi Judy and Dick. Thank you for your comments.

Dick, I don't think that racoon will be back, he seemed very happy to be down there by the lake.

Judy, End of Sept is usually about the greatest time of the year. Then and the early Spring.

We'll huff and we'll puff, and we will get some cool weather here for you.