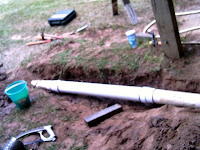 Ray and I got the sewer all primed and cemented together this morning. Getting that Schedule 40 PVC pipe in the right position required that I levered the old pipe up while Ray primed and glued it, and then we gently got it into position. With that cement you only get one shot at it. Fortunately, everything was cut to the right length, and we got it done. After it had set up for a while, we checked it, and not one drop of leak. I had bought some River Rock yesterday, and we put that under the pipe to help support it. We got the dirt back in the trench and tamped it down, and also buried a piece of treated plywood over the place where the big heavy B+ motor home would ride over it.


I still hadn't seen hide nor fur of Cashmere, the cat that arrived yesterday. I knew that she was in the grooming room, but I wanted to see her, to make sure. I did finally find her, about 10.30 this morning, she was under one of the kennel cages. I petted her, talked to her, and left her alone. She still hadn't eaten anything, and that worried me. I knew that she had mostly been in a cage at Kenya's as she had been tending her kittens, and some animals feel safer in ther own "house". I really wanted to get her in my big German Shepherd cage, so that I knew where she was, and keep an eye on her.

I looked where I had found her before, and she was gone ! Another search, even with a flashlight behind things, didn't find her. She is really traumatized by all this, poor thing. Finally about 4.00 this afternoo 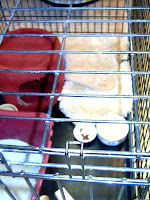 n I found her. I had to move some heavy things to get to her, and I gently picked her up and petted her, and got her in the big cage. First she got inside the red 'kitty condo', then she burrowed under this tan blankie on that white fluffy toilet seat cover. I gave her some more food, some fancy food out of a little plastic container with foil on it, some other fancy food that comes in a pouch, but she still won't eat. I looked it up on the internet and it said to tempt her with tuna, even though it is not good for her, the main thing is that she EATS. Then I tried sardines, no success. Cats go into Fatty Liver Disease if they don't eat for two days, so now I am getting worried. I just called Kenya, my SPCA boss, and she said that I should just leave her alone, she might snap out of it, but if she doesn't eat tomorrow, she will have to go back to Kenya's.
Now that I have her caged and a cover over some of it so that she feels more secure, I can keep her quiet and hopefully she will come out of it.

So tomorrow it will be me eating up the tuna and sardines for lunch that day.
Posted by LakeConroePenny,TX at 8:44 PM