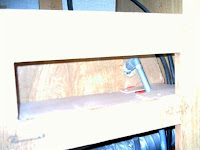 It was chilly today, so we cranked up the heat in the White B. May was in the workshop painting the rails that go on the little red wagon, and gave the oak parts one more coat of poly. She also sanded the wood we are going to use for the styles 0f the entertainment center, and polyed it.

Jay and I made the drawer front from a fake drawer into a little cubby hole. The flash went off so you can't really see it. It was the second drawer front down. The top one IS a drawer, but the other two are not. The water heater is behind it, so we made a shelf, lined it with paneling, so that stuff can't fall down to the floor. The bottom one can still be used for storage, as it opens to the carpeted floor under the stove. We will make these two into 'drop-down' access fronts with some hinges, and magnetic catches. Every little space counts in an RV, especially a small one. We also did a bit more to the 'scoop' for the main cord, and got a vented box built around the converter where all the wires go into it, so the cord can't get wrapped around them and dislodge the connections to the converter, when it is pushed in from the outside. Larger RV's have a dedicated place for the cord, but the smaller ones, often don't.

We knocked off early as we needed to drive into Conroe. Jay had to get copies of his medical records, for his attorney, so we dropped them off and were told they would be ready in an hour. I wanted to see what cabinet doors we could buy at Home Depot. Golly, why do businesses fix what works for the customer !! They don't sell just doors any more. That whole wall where they displayed the different styles of flat packs of cabinets that you put together yourself, IS GONE. We had time to kill waiting for his records, so we went to Lowe's too, as there were other odds and ends that we needed, and I had a coupon. I bought some oak, and we will make our own doors.

The rest of this draft got lost during scheduled Bloggers down time. But it was just rambling about the fact that we hung around Conroe for 2 hours for his medical records, and then found out that the gal who does the records copying was off today !! We even called them after the hour, and just got voice mail to the copy person.
So that was 3/4 of a day.
It won't stay on the font, and color I choose, so that is why it is different today. I can't see a 'save' button, but maybe it is disguised.
Posted by LakeConroePenny,TX at 5:50 PM