Where Will You Sit? Witches and the Occult. Shoes of the Gospel of Peace. A Morning Hymn and Prayer. Zeranol Use in Meat & Breast Cancer. 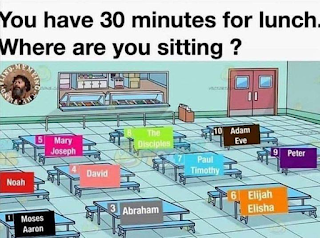 Life is short, death is sure, sin the cause, Christ the cure!

What Does God Say About Witches and the Occult?

“There shall not be found among you anyone who makes his son or his daughter pass through the fire, or one who practices witchcraft, or a soothsayer, or one who interprets omens, or a sorcerer, or one who conjures spells, or a medium, or a spiritist, or one who calls up the dead. For all who do these things are an abomination to the LORD, and because of these abominations the LORD your God drives them out from before you.”

God outlawed witchcraft and other pagan practices that appealed to the evil spirit realm for their power. To God, it was an abomination for His people to seek help from Satan and his demons. Still, the Israelites were enticed by these practices again and again.

This was not just an Old Testament concern. The new converts to Christianity also took the subject of magic seriously ( Acts 19:19 ). The apostle John also warns that those who practice witchcraft must repent or they will end up in the lake of fire—the second death ( Revelation 9:21 ; 21:8 ).

How did Western, so-called Christian nations get caught up in a holiday like Halloween that dabbles in the darkness of evil spirits, witchcraft and the occult?    See our article “Halloween: Should Christians Celebrate It?”    See also our article “Wicca: Is It Wrong for Christians?”

Shoes of the Gospel of Peace

Paul wrote about “having shod your feet with the preparation of the gospel of peace” (Ephesians 6:15). What do shoes have to do with the armor of God?

During the time of the apostle Paul, the shoes worn by the soldiers of the Roman Empire were called caligae. They were specifically designed to keep soldiers’ feet healthy during the rigors of long forced marches and were very different from the sandals worn by most of the populace.

The shoes were constructed from three layers of leather, which were pulled up and laced around the ankle. The caligae helped protect against blisters and foot diseases. In addition, small spikes or iron hobnails were often driven into the soles of the shoes in order to give firm footing on uneven terrain.

The shoes of peace provide a firm foundation

A soldier’s shoes formed the foundation of his armament. In those days, the foot soldiers of the empire relied on walking as their primary means of transportation, so the ability to move easily and comfortably was a necessity for them.

In addition, they needed to be able to step about in battle without thinking about where they placed their feet. They needed solid footing in order to concentrate on the battle at hand. The hobnails on their shoes made it easier to hold their ground or navigate through difficult terrain.

The word preparation used by Paul in Ephesians 6:15 comes from the Greek word hetoimasia. Vine’s Complete Expository Dictionary of Old and New Testament Words says this about the word hetoimasia in this context: “The Gospel itself is to be the firm footing of the believer, his walk being worthy of it and therefore a testimony in regard to it.”  Continued at:  https://lifehopeandtruth.com/change/christian-conversion/armor-of-god/gospel-of-peace/?

Without Fear, Men Forget That They Are Only Men

Arise, O LORD, do not let man prevail; let the nations be judged in Your sight. Put them in fear, O LORD, that the nations may know themselves to be but men. Selah.

Nelson’s NKJV Study Bible says it well: “Humanity in rebellion against God is a gross perversion of God’s plan. The Lord cannot allow this arrogance to go unchallenged.”

Living in this world under Satan’s influence, humanity is continuously pulled away from God and easily forgets God. We tend to overestimate our own power and influence, and the fear of our Creator God is far from us.

But a proper reverence for our Creator is a necessary first step in achieving real success and happiness. Without seeing ourselves in proper perspective, we can’t realize how much we need God’s help and guidance.

Romans 1:28-32 reveal the effects of people refusing to acknowledge and revere God in their lives. Simply put, a lack of reverence towards God leads to moral depravity.

To learn more about why evil exists in our world, read “The Problem of Evil.”

A Morning Hymn and Prayer

Give ear to my words, O LORD, consider my meditation. Give heed to the voice of my cry, my King and my God, for to You I will pray. My voice You shall hear in the morning, O LORD; in the morning I will direct it to You, and I will look up.

The word translated “meditation” here is not the same as the word used in Psalm 119, where it means reflection. Here the Hebrew word is hagiyg, and it can mean “whisper, musing, murmuring” (Brown, Driver, Briggs, Gesenius Lexicon). It is translated “sighing” in the New International Version and “groaning” in the New Living Translation. The Jamieson, Fausset and Brown Commentary says meditation here means “moanings of that half uttered form to which deep feeling gives rise — groanings, as in Romans 8:26, 27.”

We can pour our hearts out to our King and our God in prayer morning, noon or night. He hears and He cares. See more about His deep love and care for us in “God Is Love.”    From: https://lifehopeandtruth.com/bible/blog/a-morning-hymn-and-prayer/?

Zeranol Use in Meat & Breast Cancer

“In 1979, an epidemic of breast enlargement was noted in Italian children. Poultry or veal was suspected, given that estrogens may be fed to farm animals to accelerate their weight gain. After this episode, Europe banned the use of anabolic growth promoters in agriculture, and has banned the importation of American meat from animals injected with drugs like Zeranol, sold as Ralgro Magnum.

Zeranol is the one of the most potent known endocrine disruptors—100,000 times more estrogenic than the plastics chemical, BPA, for example. And Zeranol constitutes a special case among potential endocrine disruptors, because in contrast to all other estrogenic “endocrine-disrupting” chemicals, Zeranol is present in human food, because it’s deliberately used—in fact, designed to be a potent, persistent, estrogen, whereas the estrogenic properties of the other chemicals are accidental.

And if you drip blood from a cow that’s been implanted with the drug on human breast cancer cells in a petri dish, you can double the cancer growth rate. We don’t drink blood, though, but preliminary data also showed that muscle extracts, meat extracts, also stimulated breast cancer cell proliferation.

In conclusion, because these anabolic growth promoters in meat production are, by far, the most potent hormones found in human food, we should really be testing people, especially children, before and after eating this meat. It amazes me that it hasn’t been done, and until it has, we have no idea what kind of threat they may pose—though the fact that Zeranol is as potent as estradiol—the primary sex steroid in women and DES—should concern us. DES is another synthetic estrogen marketed to pregnant women—all pregnant women until 1971, when it was shown to cause vaginal cancers in the daughters. But few know it was also used in meat.

In the absence of effective federal regulation, the meat industry uses hundreds of animal feed additives, with little or no concern about the carcinogenic and other toxic effects of dietary residues of these additives. Illustratively, after decades of misleading assurances of the safety of DES and its use as a growth-promoting animal feed additive, the United States finally banned its use some 40 years after it was first shown to be carcinogenic. The meat industry then promptly switched to other potentially carcinogenic additives, such as Zeranol.

When girls started dying from vaginal cancer, DES-treated meat was subsequently banned in Europe. However, misleading assurances, including the deliberate suppression of residue data, managed to delay a U.S. ban on DES in the meat supply for eight years.

Today, virtually the entire U.S. population consumes, without any warning, labeling, or information, unknown and unpredictable amounts of hormone residues in meat products over a lifetime. If all hormonal and other carcinogenic feed additives aren’t banned immediately, the least we could have is “explicit labeling requirements of the use and of [hormone] residue levels in all meat products, including milk and eggs.””

(To see any graphs, charts, graphics, images, and quotes to which Dr. Greger may be referring, watch the above video.)

Posted by LakeConroePenny,TX at 4:52 PM